It is the major reference source to know the life conditions of the population in all the municipalities of Brazil and in their internal territorial divisions, having the resident person in the housing unit in the National Territory in the reference date as the data collection unit.

The Basic Questionnaire of the survey investigates information on the characteristics of the housing units (urban or rural status, number of bathrooms, existence of toilet, drainage of the bathroom or toilet, water supply, garbage disposal, existence of electricity, etc.); international emigration; composition of the housing units (number of residents, shared responsibility, list of residents, identification of the head, family relationship with the head of the household, etc.); characteristics of residents (sex and age, color or race, ethnicity and spoken language, in the case of Indians, ownership of birth registration, literacy, monthly earnings, etc.); and mortality. Selected housing units were investigated through the Sample Questionnaire, which includes more detailed items on the characteristics of the housing unit and residents in addition to those present in the Basic Questionnaire, as well as items on specific themes like disability, nuptiality and fertility.

The periodicity of the survey is decennial, except for the years of 1910 and 1930, in which the survey was canceled, and of 1990, whose operation was postponed to 1991.

The first population census in Brazil was carried out in 1808, specifically aiming at military interests of recruiting for the Armed Forces. It caused the suspect that its results would have been far from reality, due either to the natural prevention of the population against census operations or, mainly, to its objectives. For historical purposes, the census carried out in 1872, called General Census of the Empire, is considered the first one in Brazil, due to its bigger complexity and, above all, to the control exerted on the whole operation. It was established by Decree no. 4,856, of December 30, 1871, and conducted by the General Directorate of Statistics, later discontinued in 1879. The census scheduled for 1880 was transferred to 1887, eventually remaining just as a project. The General Directorate of Statistics was reestablished by Decree no. 113-d, of January 2, 1890, which set the date of December 31, 1890 to carry out the I Census of the Republic. The II Decennial Census of the Republic began on December 31, 1900 in the entire Brazilian territory. Nevertheless, problems with the calculation of the data in the city of Rio de Janeiro, then Federal District, caused the appointment of a commission to study this issue, which concluded to cancel the results related to the city.  Based on a legal provision towards this aim, the Federal District carried out another survey just in 1906, completed in February 1907 and released in a special volume. Scheduled for December 31, 1910, the III Decennial Census of the Republic was transferred to June 30, 1911. The operation was definitively discontinued as a result of the political turmoil that Brazil was facing at the time. Carried out on September 1, 1920, the IV Decennial Census aimed at not only the population, yet also the economic situation of the localities. As a result, the industrial and agricultural production in Brazil were thoroughly investigated. Considering the decennial periodicity of the Brazilian censuses as established by law, the V General Census of Brazil should had taken place in 1930, yet a number of reasons, particularly those of political nature, hindered the operation that year. After the radical transformation of the statistical services in Brazil – creation of the National Council of Statistics - CNE and National Council of Geography - CNG, which, altogether, formed the IBGE, according to Decree-Law no. 218, of January 26, 1938 –, the V General Census of Brazil was carried out in 1940, corresponding to the fifth population census, second agricultural and industrial census, and first surveying on trade, transportation, communications and services.  Carried out in 1950, the VI General Census of Brazil included the Population Census, whose reference date was fixed on July 1st, and the Agricultural, Industrial, Trade and Services Censuses, as well as the special surveys on transportation and communications. That census integrated the Census of the Americas, sponsored by the Inter-American Statistical Institute - IASI, addressing a specific request from the United Nations - UN. Held on September 1, 1960, the VII General Census of Brazil also followed the basic guidelines established by those international organizations, in order to assure the consistency of the concepts and allow the comparability of the census results among the American nations. In this survey, the sampling technique was used for the first time in a Brazilian census. Integrated with the Census of the Americas, the VIII General Census of Brazil was carried out on September 1, 1970, encompassing the Population Census and the Property, Agricultural, Industrial, Trade and Services Censuses, as well as special surveys on credit institutions, insurance companies and companies in charge of producing and distributing electricity. The IBGE carried out the IX General Census of Brazil on September 1, 1980, which included not only the Population Census, yet also the Agricultural, Industrial, Trade and Services Censuses and, after previous surveys, integrated with the Census of the Americas, as suggested by the UN. That survey counted on technological advances that allowed innovations in the operation and dissemination of results, which were published in the same year of the operation for the first time ever. Due to budget restrictions, the Population Census was not carried out in 1990, being postponed to September 1, 1991. Compared with the previous censuses, the 1991 Population Census innovated in a number of technical, technological and operational aspects, highlighting also the institution of partnerships – Municipal Census Commissions - CCMs and the Advisory Commission –, which worked as a link between the IBGE and the society. The 2000 Population Census, which resumed the operation in years ending in zero, anticipated the reference date of the survey from September 1st to August 1st, and represented a qualitative leap in a number of aspects, particularly concerning the technological innovation – from the system that followed up the data collection to the data capture and to the automation of the processes of data coding, edit and tabulation, through the extensive use of digital technologies, providing the most appropriate media to each segment of users. Its implementation consolidated the statistical bonds among the countries of the Extended Mercosur, which also includes Argentina, Paraguay, Uruguay, Bolivia and Chile. Carried out on August 1st, the 2010 Population Census made important transformations in the work methods, providing users with even more interactive and specialized pictures, characterized by relevant methodological improvements and technological advances. Partnerships were improved and strengthened through the State Census Commissions - CCEs and Municipal Commissions of Geography and Statistics - CMGEs, aiming at expanding the integration between the IBGE and the local communities to gather cooperation and logistics support for the implementation of institutional surveys.

The microdata are the lowest level of disaggregation of the data of a survey, representing, in the form of numerical codes, the content of the questionnaires and preserving the statistical confidentiality aiming at the non-individualization of the information. The microdata are in ASCII format, allowing expert users with knowledge in programming, preferably in statistical software, to read the data, cross them in different geographic aggregations and create multiple tabulations according to their personal interest.

The microdata files are coupled with a support documentation that provides the names, codes and descriptions of the variables and their categories, complemented, whenever needed, with elements to compute the sampling errors.

March 9, 2016 - It was detected that the activity and employment files were incomplete and that it was necessary to include new codes in the documentation that matches the codes of 2000 and 1991.

June 19, 2015 - It was detected that parts of some records were corrupted. The files were replaced.

It presents preliminary data from the 2000 Population Census, with information about the population in Brazil and in its metropolitan areas, including comparative tables showing previously-conducted censuses, as well as resident population and househing units, by Federation Units and municipalities.

Methodology of the survey carried out in 2010 (Methodological Reports Series, v. 41)

Methodology of the survey carried out in 2000 (Methodological Reports Series, v. 25)

Methodology of the survey carried out in 1980 (Methodological Reports Series, v. 4) At each ten years, the population censuses produce information that update the picture of Brazil. In... 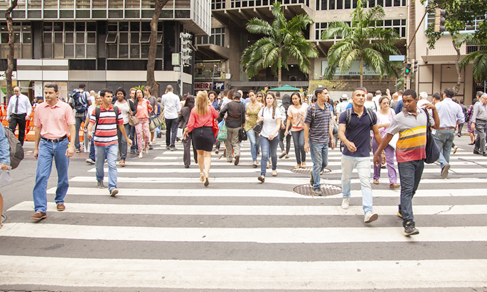