The National Household Sample Survey - PNAD, carried out annually, was finished in 2016, with the release of information for 2015. Planned to produce results for Brazil, Major Regions, Federation Units and nine Metropolitan Regions (Belém, Fortaleza, Recife, Salvador, Belo Horizonte, Rio de Janeiro, São Paulo, Curitiba and Porto Alegre), it surveyed, on an ongoing basis, general characteristics of the population, education, labor, income and housing, and, according to the information needs for the country, having the household as its unit of survey. The PNAD was replaced, with updated methodology, with the Continuous National Household Sample Survey - Continuous PNAD, which provides a more comprehensive territorial coverage and provides quarterly short-term information on the workforce nationwide.

The PNAD started in the second quarter of 1967, and its results were presented quarterly until the first quarter of 1970. From 1971 on, the survey has become annual, being carried out in the last quarter, being interrupted in the years of Population Censuses. In 1974-1975, a special survey, named National Study on Household Expenditure - ENDEF, was conducted and, as it was being carried out, the basic PNAD survey was suspended. In 1994, for exceptional reasons, the survey was not conducted. Over time, PNAD underwent methodological updates, some restricted to the sampling plan, and others related to the comprehensiveness and the conceptualizations of the surveyed aspects, in line with international recommendations.

During the 49 years of its existence, PNAD has been an important instrument for the formulation, validation and evaluation of policies targeted to the socioeconomic development of the population and the improvement of the living conditions in the country.

Microdata of PNAD 2001 up to 2012 with Projection of the Brazilian Population - Revision 2008, by sex and age. Estimates for the population of municipalities, using the 2000-2010 growth trend of municipalities.

Methodological considerations can be obtained in Portuguese in the chapter on Technical notes of the result publications of the survey. 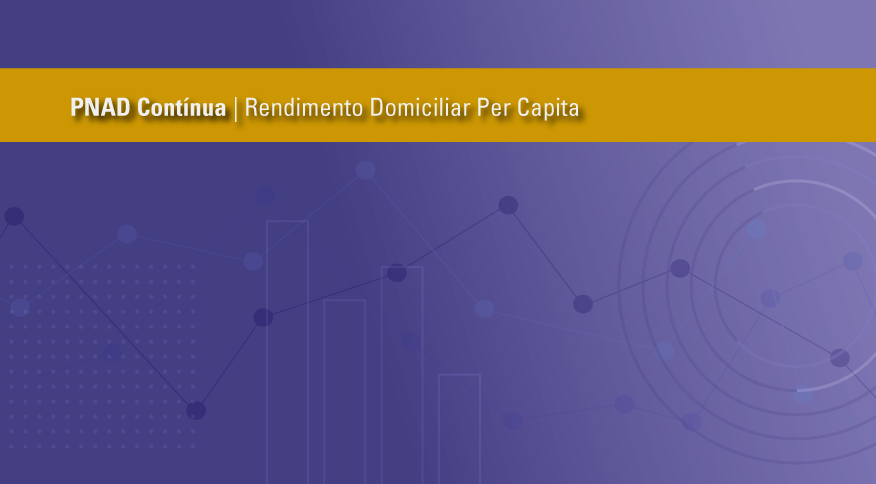 The IBGE releases today the values of the per capita household earnings relative to 2019, for Brazil...