Digital model that provides the factors to convert altitudes given by GNSS receivers, resulting in altitudes compatible with the terrestrial gravity, more suitable to describe the flow of liquid masses, like those needed in large irrigation projects, hydroelectric generation, etc.

In technical terms, a model to convert altitudes numerically describes the separation between the ellipsoid of reference of the geometric altitudes - also called ellipsoidal, resulting from the use of Global Navigation Satellite Systems (GNSS) - and the surface of reference of the physical altitudes, which is the vertical datum of the High-Precision Altimetric Network (RAAP) of the Brazilian Geodetic System (SGB), in the case of Brazil. From the geodetic coordinates resulting from the suitable processing of the observations collected through a geodetic GNSS receiver, the factor to convert geometric altitudes into physical altitudes should be extracted from the model.

The first models to convert altitudes published by the IBGE where the geoid models of the MAPGEO series, produced in partnership with the University of São Paulo (USP). MAPGEO92, MAPGEO2004, MAPGEO2010 and MAPGEO2015. The last one was the basis to develop the most recent model, hgeoHNOR2020, which opens a new series of models characterized by a better adaptation to the altitudes present in RAAP.

As responsible for the Brazilian Geodetic System (SGB), the IBGE publicly releases the geodetic information of reference required for a precise spatial positioning. In the case of the applications involving vertical positioning - like the feasibility studies and implementation works of large hydroelectric endeavors or the activities of prevention and monitoring of coastal floods associated with the rise of the average sea level due to global warmth -, the basic information is the altitude associated with each one of the nearly 70 thousand Level References (RRNN) established by the IBGE since 1945 along the entire national road network.

Such altitudes are tightly coupled with the terrestrial gravity field, assured with the use of specific observation methodologies, associating gravimetric information (either observed or theoretical) with the gaps resulting from the traditional technique of geometric leveling with procedures and instruments specifically designed for high precision. Today, the altitudes obtained that way are generically named physical altitudes. In Brazil, those altitudes were known as orthometric-normal until July 2018, when the new adjustment of the so-called High-Precision Altimetric Network (RAAP) resulted in the so-called normal altitudes, improving the integration in relation to the terrestrial gravity field.

On the other hand, the increasing adoption of positioning solutions via satellite systems led to a higher availability of another type of altitude, completely apart from the gravity field - the geometric altitude. Following up the need to convert those geometric altitudes into orthometric-normal altitudes, the demand for the so-called geoid undulation models stepped up. They represent the separation between the respective surfaces of reference (ellipsoid and geoid), named undulation or, preferably, geoid height. In Brazil, the initial versions of those models looked like geoid maps, produced and assessed from RRNNs matching the first geodetic stations established with spatial techniques - the SAT Doppler stations, resulting from observation of the Transit satellites. Compared with the results currently obtained with positioning systems via satellites, the altitudes obtained from the Transit system had significantly higher uncertainties, reaching several meters. Therefore, the consequences that the physical altitudes of the SGB were not strictly orthometric, but rather orthometric-normal, were insignificant - a proxy of the original concept in the case of unavailability of gravimetric observations in the work region.

With the improvement of the quality of the geometric altitudes obtained by common users, resulting from the evolution of the infrastructure associated with the Global Navigation Satellite Systems (GNSS), the biggest uncertainties in the conversion between altitudes began to be attributed to the geoid undulation model itself, mainly due to the impossibility to reach a dense and homogeneous gravimetric coverage in the entire National Territory and along a reasonable border and coastal line. In addition, the difference between the strict concept of orthometric altitude and its proxy through normal-orthometric altitudes of the SGB´s altimetric network became more significant.

Therefore, the IBGE began to carry out exclusive campaigns of GNSS in RRNNs in 2008, stepping them up from 2015 onwards. As a result, it was possible to recently hit a minimally suitable distribution of the so-called SAT-RN stations to begin the studies related to the improvement of the conversion of altitudes.

Lastly, it should be highlighted that the improvement of the model of conversion of altitudes was also boosted by the release of the new normal altitudes, resulting from the Adjustment of the Altimetric Network with Geo-potential Numbers (REALT-2018). Besides better coupling with the terrestrial gravity field, that new set of altitudes also reflects the effects of an extensive debugging of the gaps of the entire altimetric network. In order to also benefit the GNSS users, a specific model to convert altitudes was required, reinforcing the reasons to develop the hgeoHNOR2020. Details of that development are presented in the respective report.

The hgeoHNOR2020 model provides the separation between the ellipsoid of reference of the geometric altitudes in SIRGAS2000 and the surfaces of reference of the REALT-2018 implementation of the vertical component of the Brazilian Geodetic System (SGB), i.e., the vertical data of Imbituba and Santana. Therefore, the factor for conversion extracted from the (η) model allows to obtain the modeled normal altitudes (HNmod), compatible with REALT-2018, from geometric altitudes (h) resulting from GNSS measurements in regions where there is no suitable coverage of the High-Precision Altimetric Network (RAAP), i.e., where there are no altimetric stations of the SGB:

It should be highlighted that, in spite of the current physical altitudes of RAAP are of the normal type, their surface of reference cannot be considered equivalent to the global near-geoid, since the values of reference of the vertical data of Imbituba and Santana were maintained.

Likewise, the hgeoHNOR2020 model cannot be considered a gravimetric model of the near-geoid, not only due to the previous particularity, but also due to the fact that conventional methodologies have not been used to model the gravity field. hgeoHNOR2020 was calculated by means of the Least Squares Adjustment (CMQ) from residues of the geoid heights, extracted from MAPGEO2015, in relation to the differences between the normal and geometric altitudes in the SAT-RN stations.

Therefore, the model absorbs all the inherent characteristics of those three information sources, including the different compositions of errors, strategies of treatment of the permanent tide, etc., and cannot be associated with the near-geoid. In addition, possible changes in the position of the stations in the period between the two types of surveying (leveling and GNSS) can affect that type of geometric modeling.

In order to express that difference, the conversion factor η, provided by hgeoHNOR2020, should be considered as the addition of those inherent influences (Δ) to the separation values between the global near-geoid and the ellipsoid (ζ, altitude anomalies): η = ζ + Δ.

The access to the model is made through a calculation service implemented in this portal, streamlining the acquisition of the factors to convert between h and HN and respective uncertainties. The entry data are directly submitted through the keyboard - with the result immediately shown on the screen - or, preferably, through a file containing the list of coordinates. In this case, the results are sent to the electronic address informed, in three types of format (.txt, .csv and .kml). The direct communication with the online service to post-process GNSS data (IBGE-PPP) was also implemented in that calculation service, also available on this portal, allowing the PPP results to remain consistent with the model to convert altitudes.

Only the points located in the National Territory are submitted to the processes to select the relevant grids and interpolate the respective magnitudes through bi-cubic spline. The performance of the calculation service is mainly conditioned by two factors: previous checking of the polygons (national limits, Santana area and MAPGEO2015 west area) and the interpolation itself. For the points within the national limits, the performance is nearly 0.46 ms/point (nearly 130,000 points/min), being 60% of this time consumed in the interpolation.

More on the product - hgeoHNOR2020

The access to the hgeoHNOR2020 model is through the respective online calculation service or through calculation, to be carried out by the users themselves, by including the grids and other information in “downloads” 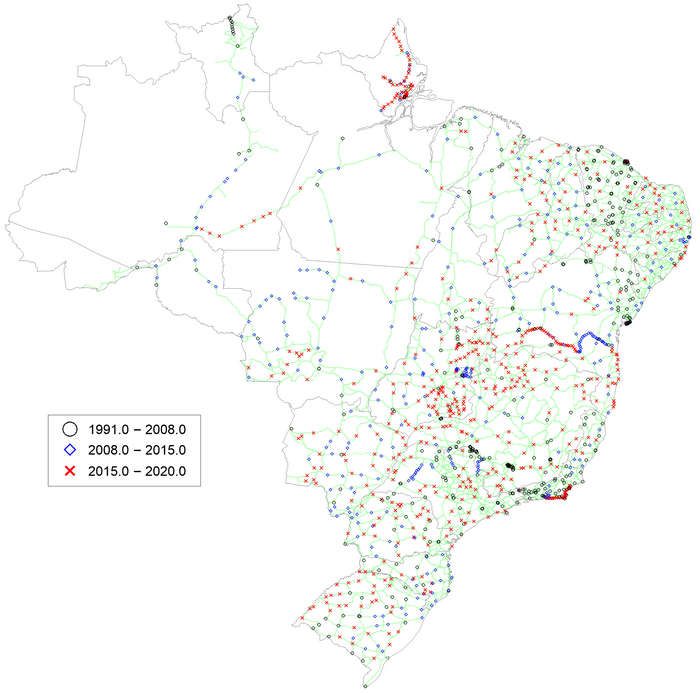 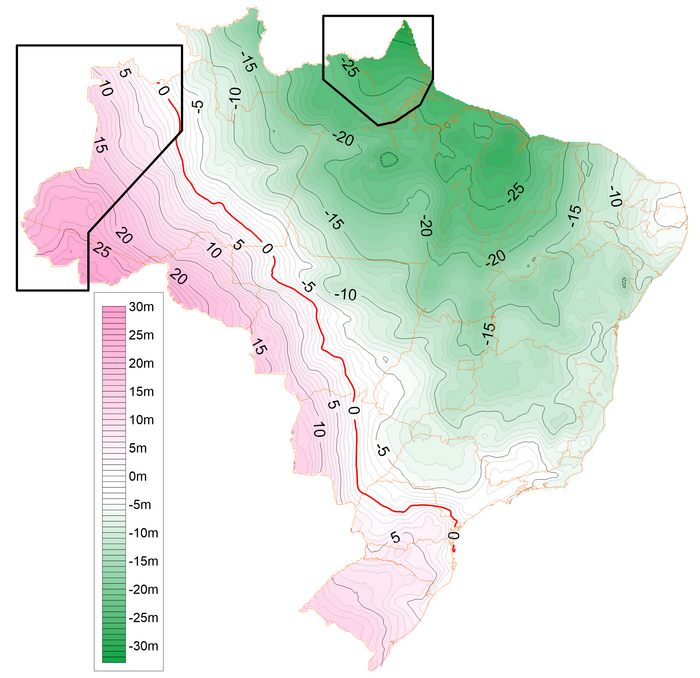 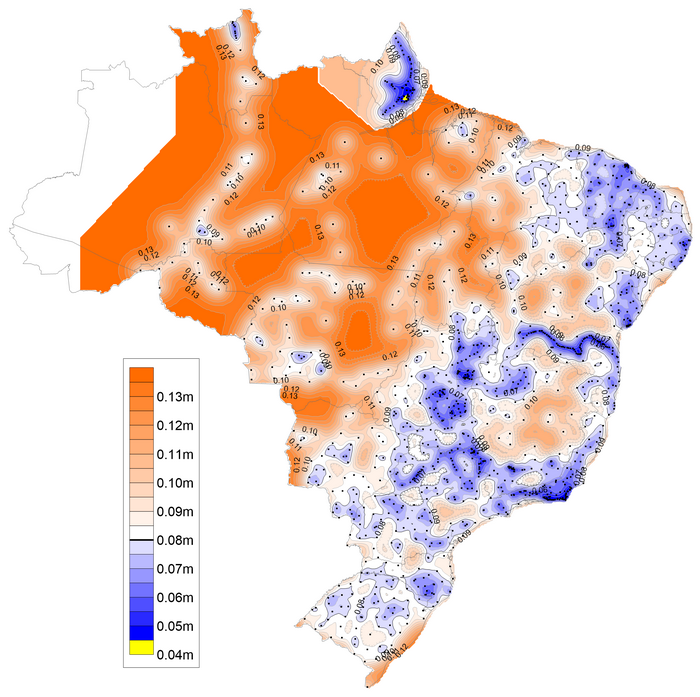 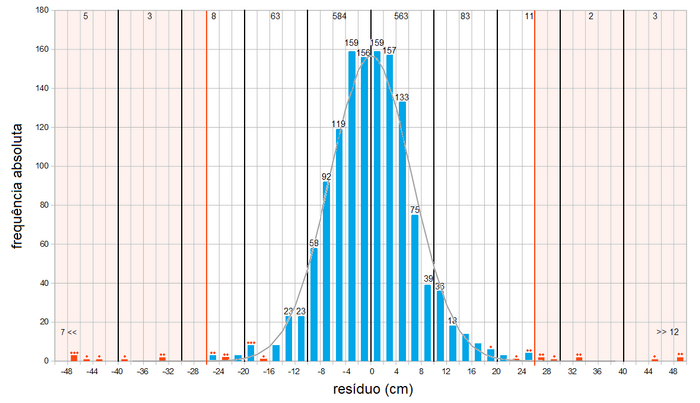 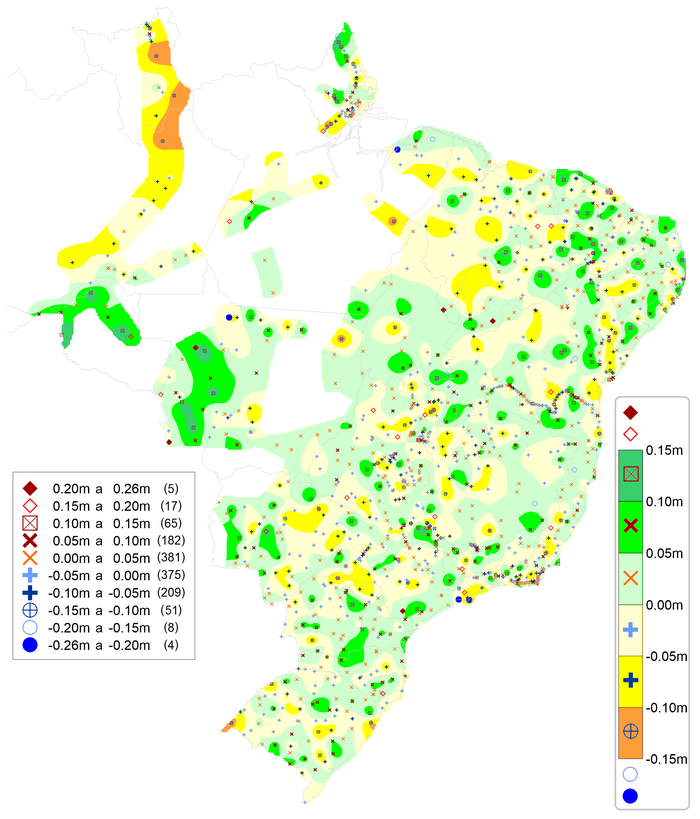 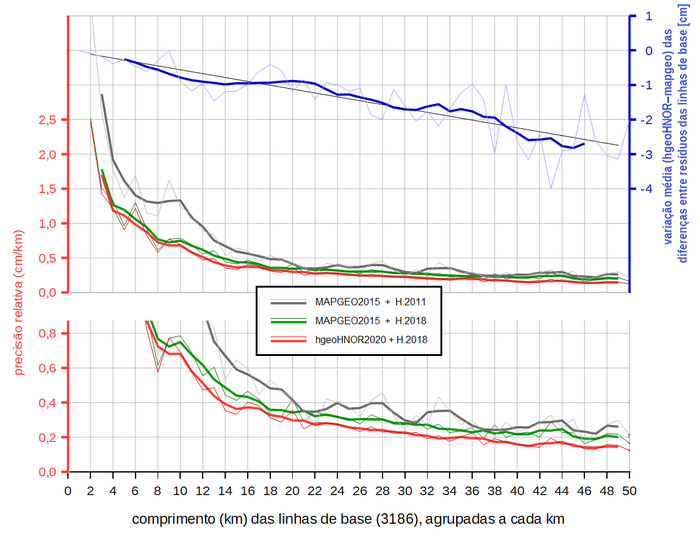 The IBGE launches today (5) an application with a new model to convert altitudes, the hgeoHNOR2020. Besides... 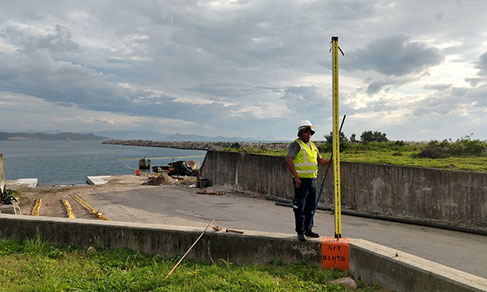