Centenary of the Brazilian Census of Agriculture 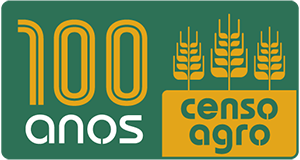 In 2020, we celebrate the centenary of the Census of Agriculture in Brazil. It is the major and most comprehensive statistical and territorial survey on the country's  agricultural production, covering information on the structurem, dynamics and production level of the activity in the country.

The information produced makes it possible to plan and assess public policies in the sector, as for instance, the land distribution issue. The results also support studies on the expansion of agricultural areas and the producing dynamics propelled by technological innovations; moreover, they contribute to the construction of environmental indicators, while providing analyses on the changes occurred due to economic reestructuring and adjustments, as well as their effect on the sector.

The first Census of Agriculture was conducted by the General Statistics Directorate - DGE, a body of the former Ministry of Agriculture, Industry and Trade. After this pioneering operation, there were 10 more editions, the last one in 2017, totaling 11 Censuses of Agriculture. The IBGE has been in charge of the operation since the foundation of the Institute in 1936.

Throughout its career, the Brazilian Census of Agriculture, affectionately called Agri Census, has evolved, always searching for new technologies to improve data capture and analysis at each new edition. Besides, as it is sensitive to the demands of its most diverse users, the survey has pursued to meet the informational needs of each and every one of them, either in the selection of themes and in the questionnaire elaboration, accomplishing, thus, the IBGE institutional mission: “To portray Brazil by providing the information required to the understanding of its reality and the exercise of citizenship.”

Conceived as a decennial enterprise, the Census of Agriculture was not carried out in 1930 for political and institutional reasons (the 1930 Revolution), and, as of 1940, the surveys became decennial up to 1970, when it started being carried out every five years up to 1985. In 1990, for economic reasons, the operation was postponed until 1996.

In 2007, the conduction of the 2006 Census of Agriculture introduced a great innovation: the use of the digital data collector with capture of geographic coordinates, totally paperless. That was an unprecedented achievement among the countries, even considering those more technologically advanced. The experience was repeated in 2017 and followed by other countries, especially in Latin America, which, by the way, visited us during the collection phase to get familiar with the procedures used by the IBGE in order to apply them to their own operations.

The Censuses of Agriculture conducted by the IBGE follow, traditionally, the technical recommendations of the United Nations Food and Agriculture Organization – FAO, allowing, thus, international comparability. Brazil has participated in regional meetings held by FAO and in international congresses of agricultural statistics, sharing experiences.

The Census of Agriculture makes us proud and its centenary gives as a feeling of mission accomplished, as it has contributed significantly to the understanding of our agriculture.