The surveys carried out by the IBGE follow the concepts and recommendations adopted and discussed in international fora. Comprising statistical offices from different countries and other international organizations, these fora aim at producing comparable statistics among every producer.

The concepts adopted by the Continuous National Household Sample Survey comply with Resolution I of the 19th International Conference of Labor Statisticians, concerning statistics of labor, employment and underutilization of workforce. This resolution defines employed work – those that produce earnings either directly or indirectly for the household – and the other forms of work.

The Continuous PNAD investigates characteristics of the employed work for persons aged 14 years and over on a quarterly basis. In order to produce the annual figures, the survey also captures other forms of work, like the own-use production work, including construction for own use, household tasks and care of persons.

Also aiming at complementing the annual releases, the Continuous PNAD also investigates characteristics of the employed work and other forms of work for children between 5 and 13 years of age.  Therefore, persons involved in employed work, own-use production work, household tasks and care of persons are known from the information obtained from the Continuous PNAD for persons aged between 5 and 17 years. As the information is captured in an independent way, it is possible to pinpoint persons involved in just one form of work and those involved in more than one of them.

The Continuous PNAD extended the coverage of the own-use production work beyond that of the Annual PNAD, which was restricted to the activities of agriculture, livestock and fishing for own feeding and construction for own use. In addition to these two types of production for own consumption, the Continuous PNAD captures the work in the production of coal, collection of firewood, water, sand and other materials; in the manufacture of clothes, knitting, crochet, embroidery, tiles, fishing nets, etc. Besides, the own-use production work was only captured by the Annual PNAD if it was the unique work.

The investigation of the work in household tasks is more detailed in the Continuous PNAD than in the Annual PNAD, as well as it specifies the care of persons.

Another relevant aspect is that the Continuous PNAD captures the number of hours usually worked in each one of these forms of work.

The investigation of the Continuous PNAD became more comprehensive and deeper than it ever reached in the Annual PNAD, even considering the revision implemented in 1992.

In the Annual PNAD, the estimates of work of children and teenagers aged between 5 and 17 years were captured according to the concept of work adopted in that survey. That concept encompassed what it is currently called employed work, in addition to the work in the production for own consumption of agriculture, livestock and fishing activities, destined to feed household members and to build for their own use. Therefore, the release of the Annual PNAD concerned children and teenagers employed in these forms of work.

In the Continuous PNAD, the employed work is released apart from the other forms of work.

Whenever releasing the microdata of the household surveys, the IBGE allows users to calculate their own indicators.

On November 29, 2017, the IBGE released the first information on the work of children and teenagers aged between 5 and 17 years related to 2016, based on the Continuous PNAD. Some of the data that will help to follow up child labor are highlighted below. 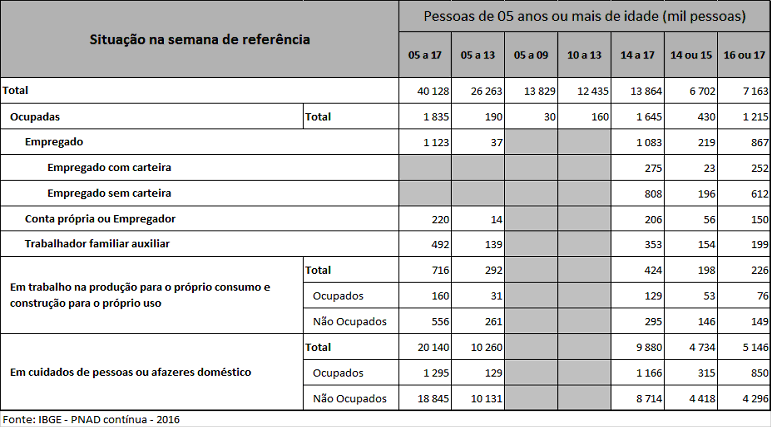