The Block-face database for public areas is made up of the addresses of urban sectors or urban expansions in each municipality. It is used by the IBGE to plan and carry out data collection for the Census and Statistical Surveys such as the Continuous National Household Sample Survey - Continuous PNAD and the Consumer Expenditure Survey - POF, among others, covering all Brazilian municipalities, particularly cities and towns.

The construction of this database started with the migration of data from the 2007 Censuses (Census of Agriculture and Population Count), unifying the mappings used in those operations. Data were originally produced from different sources, including maps of different reference scales.

In 2010, for municipalities with more than 20,000 inhabitants in 2010, vector bases were obtained by means of agreement with city halls and/or hiring of private companies. Contractual clauses restricting the use and disclosure of the resulting products prevented their dissemination by the IBGE before 2015.

Nowadays the survey depicts the stages in time of the National Address List for Statistical Purposes - CNEFE of the IBGE, according to data collection, treatment, management and updating of the Census Mapping. It was modeled according to the cadastral methodology, considering the block-faces facing the same street and grouped by enumeration areas.

Block-face Database for Public Areas portrays the urban street layout of municipalities, complemented with information on toponymy. With the disclosure of the present cadastral data, the IBGE expects to cooperate with the analyzes of spatial distribution, occupation dynamics and patterns of the urban areas of the Brazilian municipalities.

As an intermediate product, i.e., published between census operations, it neither includes statistical information of household types nor it shows the same updating degree of a Population Census.

It should be highlighted that the processes performed by the IBGE teams changed a lot over recent years, allowing to localize and extract data directly through APIs of either orbital or aerial ortho-rectified images available in the archives of the Directorate of Geosciences - DGC, aiming at maintaining the integrity and affinity with these reference images, i.e., creating better conditions of visual detailing and georreferencing of the geometry of the stretches of the road network.

Even so, some data produced may show imperfections occasionally in the geometric conditions, in georreferencing and in topological rules, like faces with inconsistent and noncontiguous extensions and azimuths, faces without connectivity and lacking nodes.

The Block-face Database for Public Areas represents, ultimately, the urban street layout of the Municipalities plus toponymic information. It is expected that the records now released are of great value for analyses on the spatial distribution, organization patterns and dynamics of changes in the urban areas of the Brazilian municipalities, considering an increase of 0.4% in relation to the previous version of 2019.

The IBGE publishes today (13) the Block-face Database for Public Areas 2020, which encompasses urban... 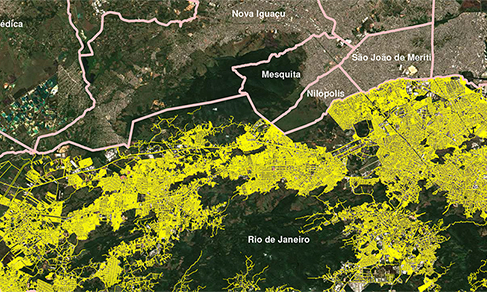